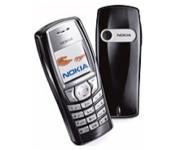 The nokia 6610 was made popular by its colour screen and simple navigation. It was the next generation in colour phones and benefited from its hour glass form.

The nokia 6610 can be purchased at the following places.

Software, manuals and support can be downloaded form the Nokia website.

This phone is more than 4 years old, so if you shop around you may be able to get it for free. Its probably not a phone you want to pay for but it will serve its purpose as a backup phone.

The Nokia 6610 was a cellphone that we liked very much when it was released. Its main advantages were a very smart modern look with all necesar functions and a no frils type of approach. Working on the success of the 6610, Nokia decided to release an enhanced version the 6610i; the major differences will be the inclusion of a built-in camera & a 4 Mb dynamic memory. These changes will only increase the popularity of this phone. This phone also has fantastic polyphonic ringtone abilities.